Happy 2014!  2013 was an amazing year in the Center Consolidated School District, with many things taking place the community can be proud of.  To celebrate the arrival of 2014 I would like to remind everyone of the great year that was 2013. 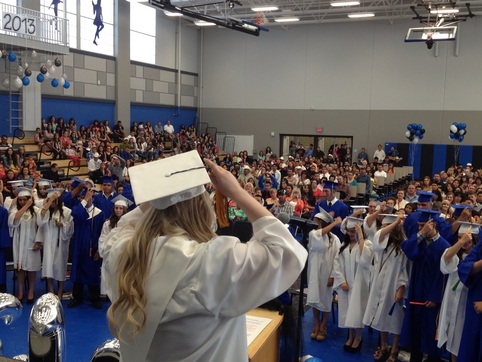 Regional Wrestling Champs
What a great job our Center High School wrestling team did this past spring when they came home with a regional championship and qualified eleven wrestlers to compete at the Colorado State Wrestling Tournament in Denver. Congratulations to Coaches Ullery, Valencia, Lopez, and Chavez for leading the team to such a great accomplishment.

Alexa Lobato Daniels Scholarship
Also in May it was announced that Center High School senior Alexa Lobato earned a Daniel’s Fund scholarship good for 4 years to a college of her choice.  Alexa has since been attending school at Texas Christina University.

More Than $200,000 in College Scholarships
Finally, at the Center High School Academic Awards Ceremony in May, Center High School Class of 2013 graduates were awarded almost a quarter of a million dollars in college scholarship support from Adams State University, the Colorado School of Mines, the University of Colorado at Boulder, Trinidad State Community College, the Kiwanis Club of Center, Ray and Collette Skeff, the McCormick family, GE Johnson, the Colorado Masons, the Daniels Foundation, and a slew of other organizations. 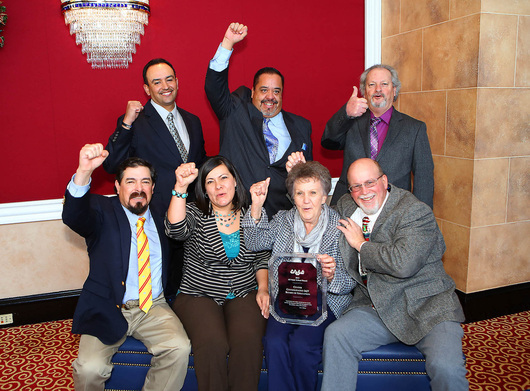 CHS Center of Excellence Award
On Tuesday December 3rd Center High School was once again awarded a Center of Educational Excellence award by the Colorado Department of Education.  Each year, the Colorado Department of Education recognizes the public schools in the state that enroll a student population of which at least 75 percent are at-risk pupils and that demonstrate the highest rates of student longitudinal growth as measured by the Colorado Growth Model on the school performance framework that is used by the state to evaluate schools.  This award program was established by the Education Accountability Act of 2009, and Center High School is one of only two schools in the entire state that has received it all five times it has been awarded.

Taylor Lobato Earns CASEY Award
Center High School graduate Taylor Lobato was presented the Colorado Association of School Executives CASEY award at the end of July.  Each year the CASEY award goes to a non-CASE member who is deemed to have had the greatest impact on education or education policy in the state of Colorado during the past year.  Recent recipients of the CASEY include former Colorado Speaker of the House of Representatives Andrew Romanof, Lobato v Colorado lead attorney Kathy Gebhardt, Colorado School Finance Project executive director Tracie Rainey, and Governor John Hickenlooper.  Taylor was given this honor because of the inspirational role she played representing all of Colorado’s students as the face of the Lobato v Colorado lawsuit.

Daniel Newmyer Named Center Schools Teacher of the Year, Given Alan Shepard Award, and Honored as SLV Teacher of the Year
In March the Center Consolidated School District announced that Skoglund Middle School-Center High School Math-Science Teacher Daniel Newmyer was named its 2012-13 Teacher of the Year. Mr. Newmyer has seven years of teaching experience, his last four being in the Center Consolidated School District.  He was honored because he clearly demonstrates a passion for his subjects and continually encourages his students to compete in science and engineering fairs at all possible levels.  Under his guidance Center High School has gone from completely lacking a science fair program at the high school level to securing the San Luis Valley Science Fair Small High School Award for the past 4 consecutive years, qualifying numerous students to attend state, national, and international competitions, and actually placing for an international award.  Daniel Newmyer was not only recognized locally for his teaching excellence, he was also granted the Alan Shepard Technology in Education Award.  This is a national award that is presented to only one educator in the United States each year.  Daniel was officially presented with this award at the opening ceremony of the 29th National Space Symposium in Colorado Springs on April 8.  If this all were not enough, Daniel followed it all up up in late April by being chosen from all the teachers in the San Luis Valley as the 2013 SLV Teacher of the Year!

All State School Board Award
In December the Center Schools Board of Education received the 2013 Colorado Association of School Boards All State Board award.   CASB cited the board for its understanding of the importance of team and trust building when it comes to governance, and for focusing on creating an effective 21st century student learning environment.  They commended our board of education for realizing that as a small, high poverty, rural district, an infusion of additional monetary resources would be necessary to achieve this, and for continually working to secure more resources for the student of the district.  Upon presenting the award a CASB representative said, “if you follow the development of state education policy and rulemaking you can see the Center Board of Education’s fingerprints on everything from the recently passed Breakfast After the Bell law, to Building Excellent Schools Today funding, to policies surrounding the preservation of historic school buildings, to actual implementation of SB 191, to how counties distribute federal funding to school districts, and to how rural geographic regions can collaborate to better utilize precious resources to drive improved classroom instruction.”

2013 Top Big Things We Have Been Working On

Colorado Sample Curriculum Rollout
In January 2013 our Center Schools teaching staff participated in the Colorado Sample Curriculum roll out event that took place right here in Center.  Center Schools hosted this important event that roughly 300 San Luis Valley educators attended.  Since the roll out, Center Schools staff members have been working diligently to develop quarterly assessments of the curriculum, and to plan quality lessons to teach it effectively.  Migrating to a new curriculum is difficult work for a teaching staff and the CSD teachers have done an outstsanding job tackling this change.

One to One iPad Rollout
Also in early January Haskin Elementary K-3 students began using iPads in the course of their daily classroom instruction.  In August we were able to expand this program through the 6th grade.  Doing so makes the Center School District one of the only Colorado school districts to have one to one device program for all K-12 students, supporting the district’s effort to “Focus on the future” and prepare all students for whatever challenges they face after graduation.

CHS Postsecondary Success
Research shows the sooner a student starts thinking about their future, the better the chance they will achieve it.  This is why at Center Schools we begin Individual Career and Academic Planning work as early as 6th grade.  In the summer of 2013 data was released that showed just how much processes like ICAP have done to keep Center Schools graduates on a trajectory toward achieving their life dreams, as it reveals that as recently as our graduating class of 2004 only 20% of our students were engaged in college or career training during high school while the graduating class of 2010 data showed that more than 71% of our students were engaged in college or career prep before leaving school.

Haskin Elementary Turnaround to Performance
In September the Center School District Accountability Committee reviewed school level student achievement data and recommended to the board of education that Haskin Elementary School be accredited with a “Performance” rating this year for the first time ever.  Colorado school performance rating options range from the lowest end at “Turnaround” to “Priority Improvement” to “Improvement,” and to the highest single school rating which is “Performance.”  These ratings are determined based on a formula set up by the Colorado Department of Education through its School Performance Frameworks (SPF) system.  As recent as 2010 Haskin Elementary School was rated “Turnaround” based on this system.  The entire Center Schools community was simply thrilled that the transformation work that took place at Haskin Elementary School resulted in such positive progress so quickly.

Top 5 Amazing People Who Visited Our Campus in 2013 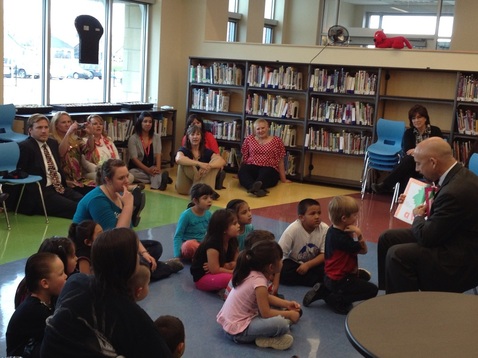 Astronaut Kent Rominger
This past spring Center Schools had a very special visitor.  Mr. Kent Rominger, a San Luis Valley native and former NASA astronaut with more than 1,500 hours of flight experience, visited our schools to share his passion for math, science and how they both relate to piloting and space exploration.  At this time the district was able to honor both him and the late Neil Armstrong, the first man to set foot on the moon, by dedicating to them the artwork adorning the walls in the new science wing. Each wall has a picture of each of these gentlemen.  The decision to place these images in our hallways stems from our belief that any one of our students has within them the talent, work ethic, and ability to go forth and achieve even greater things than have been done by the people we have placed before them as role models.

State Board Member Angelika Schroeder
In early October Colorado State Board of Education member Angelika Schroeder spent a day on the Center Schools PK-12 campus to learn more about our literacy intervention processes, to learn how we are implementing the new Colorado Sample Curriculum, to see how the district is implementing the requirements of SB 191 teacher evaluations, and to tour our new facility.

Commissioner Robert Hammond
On Friday December 13th Colorado Department of Education Commissioner Robert Hammond was on our campus to attend the quarterly Colorado Department of Education Rural Council meeting, and to present Center High School with its 5th consecutive Center of Educational Excellence award.  Appropriately, Center High School principal Kevin Jones asked long time CHS teachers Diane Parker, Dennis Schoenfelder, Katrina Ruggles, and Kindra Rounds to accept the banner that was presented.  Diane, Dennis, Katrina, and Kindra are the only CHS teachers who have been around for the entire 8-year span of excellence that Center High School was being honored for.

Lieutenant Governor Joe Garcia
In early May Lieutenant Governor Joseph Garcia was on the Center Schools campus to tour the new facility, peek in on classrooms, and promote Colorado Early Childhood Literacy Week by sharing the joys of reading with Center Children in the Fyock Community Library,.