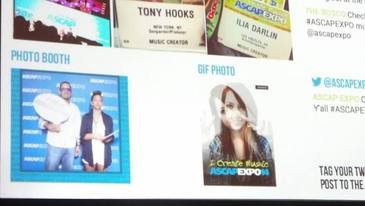 Over the weekend Center High School senior Louise Vazquez had the opportunity to attend the American Society of Composers, Authors, and Publishers (ASCAP) Exposition in Los Angeles, California, having earned her way there on the merits of her scientific research project on sound resonance.  While there she got to meet many entertainment industry celebrities and then she presented her research findings in front of a panel of experts.  I want to especially thank Center High School math teacher Diego Martinez for supporting Louise toward gaining this wonderful learning opportunity. 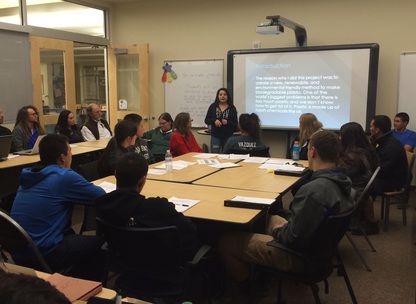 Congratulations are also due to Center High School junior Daisy Garcia who has been selected to represent Colorado by carrying the flag at this year’s International Sustainable World Energy Engineering Environment Project opening ceremonies.  Daisy is attending this event because she earned her way through her scientific research project on biodegradable plastics.  She joins a select club of past Center High School students who have earned the honor to carry the Colorado flag at this event including Nick Arellano,  Morgan Hart, and  Alexa Lobato 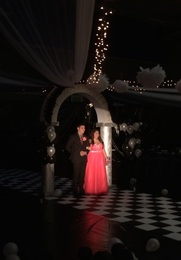 (clarinet solo), Alexis Sanchez (flute solo), Camille Ruggles (flute solo), Cosme Cordova (snare drum solo), and Victoria Montoya, (bass clarinet solo).  If you would like to sample the talents of these young musicians in person you can attend their spring concert on Wednesday April 30 at 7 PM in the Center Schools Auditorium.

Finally, I want to thank this year’s Center High School junior class sponsors for the guidance they offered our students in pulling off a successful prom.  The event was well attended and the auxiliary gym bleachers were packed with family members to witness the traditional grand march.  Thanks to Julie Weatherford, Stefan Welsh, Lee Flood, and Diego Martinez for their hard work all year.  I also want to thank Center High School Principal Kevin Jones for the leadership and supervision he provided along the way. 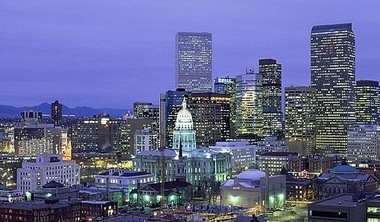 Early this week we’ll be working on quite a few items in preparation for next school year.  On Monday the Center Schools Calendar Committee will meet to develop some proposals for consideration by the board of education for the upcoming school year.  We will also be working on some budget items, most importantly a draft of our anticipated revenues that we'll use to develop our overall 2014-15 budget, as well as a possible plan to renew a large portion of our aging district vehicle fleet.  We continue to monitor the action of the legislature as it works on the final details related to this year's School Finance Act and the Student Success Act.  Though changes are being made every day, the current status of this legislation includes districts receiving growth plus inflation support per Amendment 23, a slight increase in funding that will go toward full-day Kindergarten and preschool program efforts, a boost in recurring funding of $110 million due to an increase in the buy-down of the negative factor, dedicated funds for at-risk students who cost more to educate (currently $20 million extra toward the READ Act and $30 million extra to support ELL instruction).  These state funding streams, as well as those made available through the federal government through title programs and secure rural schools, will help us to determine just how many dollars we will have to operate on for the coming year.

Center Schools was closed on Monday April 21st in celebration of Easter.  On Tuesday and Wednesday I was in Portland, Oregon attending the National Forest Management and Federal Payments Symposium.  I made my way back to Denver on Thursday to attend the Public Education Business Coalition Luncheon with Center School Board president Michael Lobato.  Michael had the pleasure of introducing Denver attorney and San Luis Valley native Kenzo Kawanabe who received a Cal Frazier Investing in Education Award  for his work on the Lobato v Colorado lawsuit.  PEBC is the organization that has spearheaded the Boettcher Teacher program from which Center students are already greatly benefitting.   While there, we also had the pleasure of hearing Dr. Yong Zhao, an internationally known scholar, author, and speaker.  His work focuses on the implications of globalization and technology on education and he has designed many schools that cultivate global competence.  I then stayed in the Denver area on Friday to attend a critical conversations session related to English Language Learner instruction, hosted by the Mapleton School District.  Center Schools director of instruction Lori Cooper, and Haskin Elementary principals Kathy Kulp and Sarah Vance attended this event with me in an effort to gather ideas as to how we might improve our instruction for ELL students in the future. 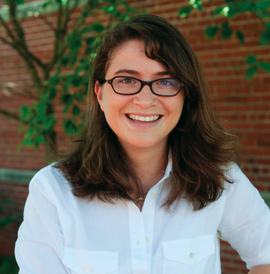 On Monday I have a very busy meeting schedule including work on some major budget items for the coming year, our calendar committee, and a visit with Chalkbeat rural education writer Kate Schimel.  On Tuesday I will have a lot of time to work in my office and visit classrooms, and then I get to end the day by speaking at the Haskin Elementary Honor Society induction ceremony.  On Wednesday I travel to and from Steamboat Springs to attend the CDE Rural Education Advisory Council meeting.  I am hoping to make it back to Alamosa in time to attend the SLV Teacher of the Year recognition dinner that evening.  On Thursday I will be attending a webinar meeting with CDE regarding an assessment study they have been conducting.  Thursday evening is also the Haskin Elementary School Spring Music Concert.  On Friday we’ll have Center Schhools students attending the ISWEEP program in Houston and musicians marching in the Canon City Blossom Festival parade. 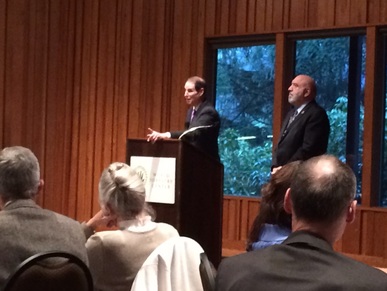 As stated above, I spent the early part of last week in Portland, Oregon at the National Forest Management and Federal Payments Symposium.   This was being hosted by the National Forest, Counties, and Schools Coalition, and the Partnership for Rural America.  Because Saguache County and the Center School District relies so much on federal land funding through the government, I was asked to attend this gathering to represent the Colorado Association of School Executives and Colorado's rural school districts and counties.

The event kicked off with a dinner and a keynote speech by Oregon Senator Ron Wyden.  Wyden is the chair of the senate finance committee, but also serves on the budget, energy and natural resources, intelligence, taxation, and aging committees.

Senator Wyden is well spoken about rural county needs and the key issues large swaths of federal land create for local governments and schools.  His personal goals are to make Secure Rural Schools and Payment in Lieu of Taxes funding more adequate for counties and school districts, and to make them more reliable by reauthorizing each program for longer terms.  He clearly expressed the importance of educating the general public about these issues, especially those who live in states with very little federal land influence.  The example he used is that a state like Connecticut has virtually no federal land, thus we need to help their congressional representatives understand the impact not being able to tax such properties has on infrastructure and the ability to provide services to people by rural counties and school districts.

A great illustration was shared at the session that showed how if all the western federal lands (not including Alaska) were superimposed over the eastern states, darn near all but the several states that border the Mississippi River would be covered.  I have attached a photo of this. 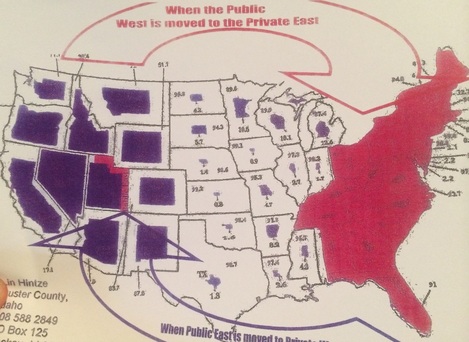 Wyden described the last 15 years of his work on SRS and PILT funding as "threading the needle" to pass and pay for the program at varying levels.  During the Wednesday session I learned the current standing for SRS: it is in both the president’s and congress’ 2014 budget, but the actual SRS program has not yet been re-authorized by law.  We learned that PILT is currently authorized by law, but is not yet funded for 2015 (which pays for funding decisions made by counties in 2014).

One truly striking statistic presented at the symposium is  the average school district that benefits from SRS funding falls within the 70-80% free or reduced lunch population band!  So not only are these areas already stretching resources to provide services, they are doing so with some of the most challenging populations.

Event participants ranged from Colorado, Oregon, Washington, Alaska, Montana, Idaho, Arkansas, California, Texas, Arizona, Tennessee, and others I am sure I have failed to mention.  There were county elected officials and administrators, and quite a few school board members and school district administrators.  I even met an Oregon Education Association representative who said their interest is making sure schools have access to adequate dollars through the SRS program.

We also learned about three major legislative initiatives going forward in relation to SRS and/or PILT:  Representative Hastings is working on a Forest Management Bill, which would establish forest reserve revenue and distribute those funds through SRS and PILT.  It also focuses on healthy forest management and wildfire prevention.  Senators Wyden and Crapo are working on a Wildfire Funding Bill that includes SRS and PILT funding.  Senator Pryor and Representative Crawford are each putting forth Endangered Species Act bills.  Each of these seek to codify SRS and PILT programs and funding, and it is suspected a few of them might be incorporated into some other form of future legislation for the benefit of each.

Senator Wyden and the leaders of the NFC and S Coalition and Partnership for Rural America emphasized the importance and impact of elected officials, such as county commissioners and school board members, getting behind these efforts.  He said he believes pressure form such folks really made a difference in the passage of the Helium Bill this past year that included SRS funding, and the Farm Bill that included PILT funding.

Why is this such an important issue to Center Schools and Saguache County?  Because each entity serves people who live on, near, or need access to federal lands, and because each entity is unable to tax such lands due to the lands' federal exemption, it is very important that these dollars in lieu of tax receipts come our way.  During the past three years the Center School District has benefitted at a level of just around $800,000 per year from SRS funding.  The Mountain Valley and Moffat School districts have received significant dollars as well.  Saguache County relies on these dollars to support its Road and Bridge department and its general fund activities.  Each of us would certainly survive without such funding, but each would have to make significant budget reduction choices in order to do so.