I would like to begin this week by congratulating Center High School Music Teacher and “overall science enthusiast” Kate Newmyer for being selected by the National Aeronautics Space Administration (NASA) to play a key role in the first “Orchestra in Space” project.  Many of us know Kate as a great teacher and musician.  However, she has also shown quite the interest in science and space travel.  Last year Kate applied for, and was recently accepted, to join the special “Orchestra in Space” mission which will take place on the International Space Station (ISS) in the summer of 2014 (assuming the next generation American space transport system, the Orion, will be operable).  Congratulations Kate!  Mrs. Newmyer will spend the better part of Spring 2014 in training for her flight.  We look forward to seeing and hearing her playing the oboe on this special mission, and we have no doubt she will share this wonderful experience with our students when she returns to work for Center Schools in the fall of 2014.

If this isn’t exciting enough I hear Center High School sprinter Esmeralda Nungaray set a North American high school record in the 400 meter race on Saturday at the Center Community Park during the Center Invitational Track Meet!  Esme finished her heat in a time of  51.10 seconds and after race officials checked the wind meters, and it was determined her time was the best ever run in the United States, Mexico or Canada for a high school age student! Her time bested the former record held by Jessica Beard of DesMoines, Iowa, who once ran the distance in 51.15 seconds. This accomplishment was made possible in part by Center High School athletic director Kevin Jones’s effort to purchase and put in place a track-timing system that can measure races with accuracy to a 100th of a second. Congratulations Esme!

Finally, this week it was reported that long time Center High School language arts teacher Diane Parker has been selected as one of three ghost writers who will have access to Johnny Depp during the filming of the movie The Lone Ranger this summer in the Creede area.  Mrs. Parker will be collaborating with other writers on a new biography of Depp, the Hollywood star who has appeared in many top grossing movies including the Pirates of the Carribean movies and the upcoming Dark Shadows.

Unfortunately for Center Schools, this week Center Virtual Academy Director Chris Vance announced that he will be accepting a job with he Microsoft Corporation at the end of the school year.  Chris recently performed some volunteer technology work for the Colorado Department of Education, creating an electronic document that will be used to gather data related to the new Senate Bill 191.  In doing this it seems Chris came to the attention of the Colorado Legacy Foundation, and eventually former Microsoft Chairman Bill Gates (who has shown a keen interest in education reform efforts through his foundation), and Microsoft has now secured Chris' talents to develop similar products to be sold all over the country.  We will certainly miss Mr. Vance as he did an outstanding job establishing our Virtual Academy, expanding Center Schools educational opportunities to a population of students who otherwise might not be attending high school and working toward a diploma. 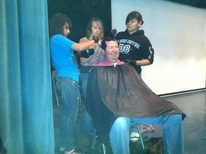 Another setback the Center School District will have to deal with this week is the temporary loss of Center High School Principal Kevin Jones who will be taking a leave of absence to address a rare medical condition called Cyaneus Follicular Oopmaloompatisis.  Mr. Jones is fighting this condition as a result of hair follicle poisoning caused by faulty coloring chemicals applied to his scalp fulfilling a challenge he offered to high school students for great performance on the 2011 CSAP tests.  Skoglund Middle School Principal Carrie Zimmerman will be taking on Mr. Jones’ duties until he returns. 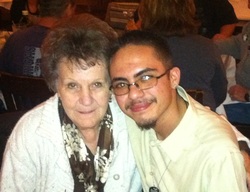 Because of a need to expand to three 5th grade sections next year, Haskin Elementary School has been searching for an additional 5th grade teacher.  This search concluded this past week when Center Schools board director Margaret Faron agreed to come out of retirement.  Mrs. Faron taught at Haskin for more than 30 years, impacting the lives of generations of Center Schools students.  We truly look forward to seeing Margaret in the classroom once again.   Unfortunately Margaret’s appointment to teach 5th grade leaves us with an open Board Member position, as she had to resign since Center School District policy states employees of the district can not serve on the board of education.  Her seat will be filled in the next few months through an interview and appointment process conducted by the remaining Board members. 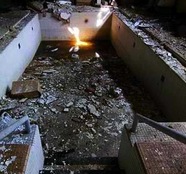 Much action related to our new building construction process took place this week.  By far the most interesting item to report is that while RLH Engineering was conducting asbestos abatement underneath Haskin Elementary School a swimming pool was actually discovered.  It appears that a 25 yard long by 15 yard wide (5 lane) pool exists underneath what is now the Kindergarten wing.  RLH reports that the sub floor beneath what was once a multi purpose room was constructed in a way that the floor could be opened and the pool could be used for PE classes and general recreational events.  The pool is located in the footprint where our new parking lot will be placed so, unfortunately, there will be no way to reclaim it for use. 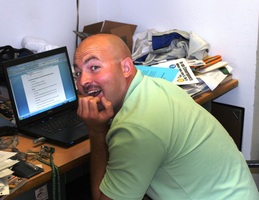 This week I would like to highlight the tremendous effort displayed by Haskin Elementary School physical education teacher Andrew Hawkins who lived up to our core belief  “There is NO excuse for poor quality instruction.”  Andy, while teaching a double sized class of 3rd graders on Friday due to scheduling conflicts caused by TCAP testing, injured his left anterior cruciate ligament while teaching students how to line dance.  Though this injury occurred during the “Boot Scoot Boogie” Mr. Hawkins was able to continue his instruction, leading his students in the “Electric Slide” and “Achy, Breaky Heart” before Center School District nurse Alice Burch finally convinced him to sit out the rest of his classes, allowing his student teacher Jay Adams to complete the instruction for the day.  Andy had an MRI late in the day Friday and I am told he should be back in front of his classes, though on crutches, by the end of the week after spring break.

Of course this week is spring break so school buildings will be closed in Center.  This is also the week each year when the good folks at the Sand Dunes Recreation Pool in Hooper close their doors for their annual stretch of comprehensive facility maintenance and improvement.  In talking to Center High School graduate and pool owner Ed Harmon late this week, I learned the exciting news that the Hooper Pool has won the right to host the 2013 and 2014 Colorado State High School Swimming Championship meets.  This means that after the pool closes at the end of the day on Wednesday April 4th folks who have grown used to swimming laps the short way across the pool (north to south) will no longer be able to do so.  When the pool re-opens on Friday April 13th the pool will sport seven swim lanes running from east to west.  This is an exciting opportunity for SLV schools, as many may want to take this opportunity to create competitive swim programs now that such a pool will be available in the area. 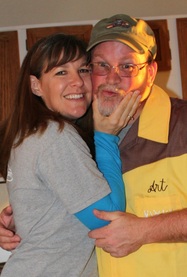 Becky and I have a big announcement to share with the Center Schools staff and community this week.  Though I must admit we were shocked at first, we have truly been blessed, especially for a couple of our advanced age.  What amazes us is that our “big day” will be coming so soon.  In fact, we have been told it will likely happen by the end of the summer.  Between now and then we’ll have so much to get done.  We’ll need to order new furniture.  There will certainly be a lot of rearranging that has to be done.  Of course we’ll also have to buy new children’s books.

You see, I’ll be helping Becky move into a new library soon, and we just can’t tell you how excited we are for ourselves, our community, and all the kids of Center.

Thank you all for making such a wonderful dream come true, and we wish you a HAPPY APRIL FOOLS DAY!