On Friday December 9th a decision in the Lobato v Colorado lawsuit, a court case involving Colorado school finance, was issued.  Here is a quick explanation of what happened and where we go from here.

What is Lobato v Colorado? 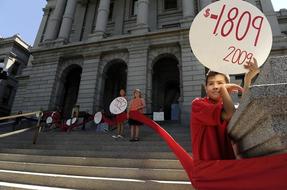 Lobato v Colorado was filed in 2005 claiming Colorado’s School Finance Act is unconstitutional because it’s not rationally related to education requirements set forth by Colorado’s legislature and it does not provide for a thorough and uniform system of education for all Colorado students.  After originally being dismissed the case navigated Colorado’s judicial appeals system and was heard by the Supreme Court in the fall of 2009 where, by a 4-3 vote, the justices declared the case should be given a trial.  The trial finally took place in August 2011.

Who Has Been Involved? 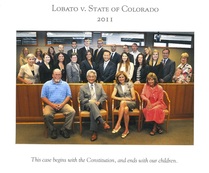 Lobato v Colorado sprung from the efforts of Kathy Gebhardt, a lawyer from Boulder who was deeply involved in the Giardino school facilities adequacy lawsuit of the late 1990’s.  Over time Kathy garnered the support of 21 school districts including all 14 in the San Luis Valley.  There were also dozens of individual families who signed on as Plaintiffs, including four from Center.  Eventually millions of dollars and thousands of hours have been donated to the cause by various school districts, organizations, law firms and individuals.  Kenzo Kawanabe, a trial lawyer with roots in Alamosa, donated his time to litigate the matter during the August 2011 trial.

As a result of the trial, on December 9th 2011 Denver District Court Judge Sheila Rappaport ruled that the state's school-funding system is not "thorough and uniform" as mandated by the state constitution and "is not rationally related to the mandate to establish and maintain a thorough and uniform system of free public schools." Rappaport went on to call Colorado’s system of school finance "unconscionable" and said "It is also apparent that increased funding will be required to fix it."

What Will Happen Now?

With a decision rendered much political posturing will begin and it is very likely the state will appeal Rappaport’s decision and the case will appear once again in front of the Colorado Supreme Court.  If this were to happen the appeal would likely be heard in the fall of 2012, with a decision being rendered by the end of the year.  If the decision holds it will be up to the elected state legislature to design a solution that meets the requirements set down in Judge Rapaport’s decision.  However, no matter what happens in the courts the conversation regarding Colorado’s education funding inadequacies has been struck up and the legislature will likely take action to remedy it.

If More Money is Needed, Where Will It Come From?

One of the greatest concerns our lawmakers have about the decision is that Colorado’s Taxpayer Bill of Rights limits the way the legislature can raise revenues to address such a problem.  It is the belief of the Lobato Plaintiffs that Colorado’s constitution clearly states that the legislature is given power to work around TABOR in matters where a legal judgment requires them it do so.  More money may be needed to solve the problem, but because of the ruling the legislature should not feel handcuffed in seeking ways to provide such resources.

What Role Did Center Schools Play? 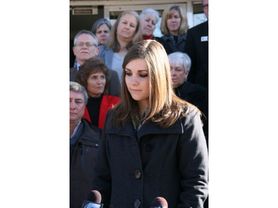 Center Schools has been actively involved in the case since 2003 when Kathy Gebhardt approached Superintendent of Schools George Welsh and evening community meetings were organized to discuss issues surrounding statewide school finance.  Center was an early target of Ms. Gebhardt because of its high at risk student population, vast number of English Language Learner students, and low property wealth.  These factors have caused Center children to be among the poorest funded students in Colorado.  As the case progressed four Center families formally signed on to the litigation, the families of Anthony and Denise Lobato, Miguel and Yuridia Cendejas, Dave and Linda Warsh, and Pantaleon and Maria Villagomez.  The case got its name in 2005 when Kathy Gebhardt approached the Anthony and Denise Lobato to ask if they would be willing to have their name listed as the first Plaintiff.  As the case progressed Center Schools stayed involved by formally signing on as a school district Plaintiff, providing nominal financial support to the effort, offering stories and expertise regarding its own financial circumstances, and providing documents and expert depositions as the case proceeded toward trial.

In August 2011 Center Schools took to the statewide stage when Superintendent Welsh served as the leadoff expert witness on the first day of the trial.  Mr. Welsh’s testimony was followed by that of Center School Board Director and parent Miguel Cendejas.  Stefan Welsh, a 2007 Center High School graduate, testified as to the learning conditions in schools throughout the state when asked to narrate a video he made about school facility conditions.  A highlight of the trial was when Taylor Lobato, a middle school student at the time efforts began to solve the problem and eventual 2010Center High School graduate, took to the witness stand to describe the lack of resources and support she experienced as a Center Schools student.   The trial ended with Mr. Welsh being called to the stand as a rebuttal witness on the last day. 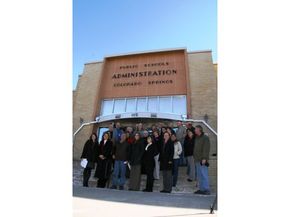 Throughout the trial the family of Anthony, Denise, Taylor and Alexa Lobato served as the human face of the case with dignity, grace, and intelligence.  Often attacked in the press for taking a stand, the family stood together and endured a media onslaught while continuing to communicate the message of the purpose of the case.

Center’s testimonial contributions, along with that of nearly sixty other witnesses (including many others from the San Luis Valley) helped lead Rappaport to the conclusions that were communicated on December 9th.

9 News Colorado Series of Stories on the Case and Decision