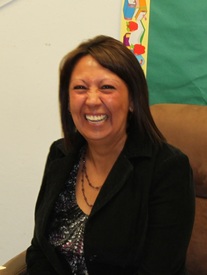 I want to offer a gigantic thank you to Haskin Elementary School secretary and assistant teacher Lupita Ortega who stepped in to support the Saguache County Health Department this past week by translating an important letter about a recent outbreak of Pertussis (Whooping Cough) in the county. Lupita took her time to translate this letter into Spanish so ALL of our county citizens would have the knowledge they need to protect their families from transmission of this bacteria.  Lupita’s contribution may have even saved lives!  On Thursday I received a very thankful email from the Saguache County Public Health Department letting me know just how grateful they were to Mrs. Ortega for her service to the community.

Center High School and Skoglund Middle School art teacher Lauren McEvoy has taken on an additional role this year as she is doing her college internship in school counseling along side Center Schools contracted counselor Katrina Ruggles.  Because of this Lauren has been quite busy this year.  Though her current workload is a bit overwhelming, Center High School principal Kevin Jones says, “Lauren is still doing a great job planning, preparing, and teaching our kids while also being an asset to the district in the counseling department.” 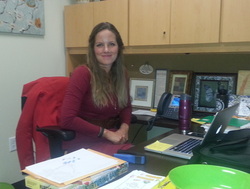 Rumor has it that Haskin Elementary 4th and 5th grade teachers Colleen Hurst and Zoraya Vazquez were quite the hit during our fall parent teacher conferences.  It turns out, unbeknown to us, they each can communicate in sign language.  This was a tremendous benefit to one of our parents last Thursday.  A member of their teacher team said, “it was absolutely amazing to watch them.”  “The parent was excited and I could tell just how much it meant to her and her kids that these ladies were actually able to communicate directly with her in sign language!”  Thank you Coleeen and Zoraya for sharing this hidden talent with us!

It is also exciting to know that with Fyock library’s new AspenCat Union Catalog, all library patrons (4th grade and up) now have access to additional services which can 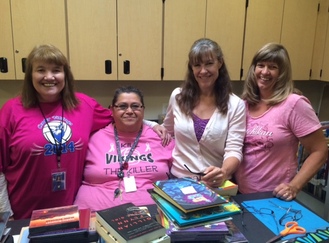 be used on just about any electronic device a person might have access to.  The first is 3M Cloud Library which lets patrons check out thousands of ebooks that can be read on smart phones, laptops, desktops, iPads, Kindles, Nooks, and Droid tablets. These books can be checked out for 21 days each, and when they are due they just disappear from your device so you don't even have to remember to return them.  The second is the OneClick eAudio application which gives our patrons access to a library of over 4,000 audio books.  These can be downloaded using an Internet connected device, and played offline.  While the 3M books work “one book, one patron" just like traditional print books, nearly all of the OneClick eAudio books allow multiple users to check them out at the same time. Thus, if a teacher wants several students to have access to an audio version of something they are reading in class, every student who needs it can check it out.  Community members might choose to do the same as part of a social book club!  I want to thank the entire Fyock Community Library staff for seeking out this great service and making it available to our staff, students, and community members.  I have already listened to my first OneClick audiobook selection titled “The Long Ball” which is about the 1975 baseball season and World Series.  Unfortunately, the Red Sox still end up losing the championship to the Reds in seven games. 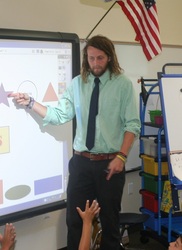 Finally, I want to offer kudos to Center High School-Skoglund Middle School ESL teacher Nate Koerber for working with the good folks from Colorado College in Colorado Springs on a college class project involving having their students live in a rural community with English Language Learners and getting to deeply know the experiences of the students.  Colorado College professor Martha Slayden has been working with the Center School District since early last summer to set up this opportunity for her students, and they all finally arrived on campus this past week.  Her scholars have each been assigned a Center Schools study buddy who they will be following and supporting throughout their school day. These college students are being encouraged to help our teachers with instruction and are also acting as additional classroom aides.  I have no doubt the Colorado College students will learn a lot from our kids, and our children will benefit greatly from their presence in their lives.  Thanks Nate for being so great at getting this going for us! 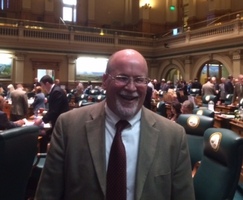 Last year school district leaders from all over the state of Colorado worked together to draft a letter asking the Colorado legislature and Governor Hickenlooper to work to significantly reduce Colorado’s one billion dollar education finance system Negative Factor.  Only slight progress was made in relation to this effort, but Center Schools has already benefitted greatly by the position Colorado superintendents took to make sure additional dollars flow to at-risk school children via increased funding for the English Language Proficiency and READ acts.  These new dollars that have flowed into the district are allowing us to maintain our after school reading academy at current levels and to increase ESL instructional staff by 1.5 teachers.

Last week Governor Hickenlooper’s 2015 state budget proposal included an additional 200 million dollars above and beyond required Amendment 23 funding for Colorado schools, meaning Center Schools could receive a bit more than $230,000 in additional revenues for the 2015-16 school year.  But once again Colorado’s superintendents are back at it, crafting a position statement asking to add an additional 70 million dollars to this proposed funding package, 50 million of which would be distributed directly to students who qualify for free or reduced lunch (90% of our kids in Center) and another 20 million that would be distributed per pupil to students who are educated in one of Colorado’s “small rural” districts as defined by the Colorado Department of Education (all districts with fewer than 1,000 students, including Center).  If this advocacy effort were to succeed Center Schools would erase $500,000 of its remaining annual $700,000 funding cut that was a result of the Great Recession and the imposition of the Negative Factor.  I am truly excited about this work being done by our state’s superintendents and will report to everyone on its progress as the legislative session revs up in early January. 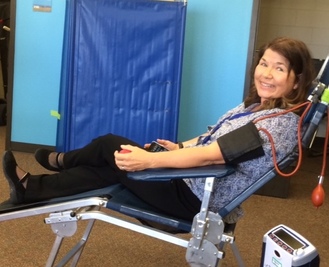 On Monday I attended a meeting with director of technology Julio Paez and building principals that solidified administrative policies related to appropriate student use of technology devices.  I also participated in Center High School’s People with a Cause blood drive.  On Tuesday I spent a lot of time in the buildings, while also catching up on a ton of job related paperwork.  On Wednesday and Thursday Center Schools conducted annual fall parent-teacher conferences.  I also made a quick jaunt to the Denver area on Wednesday evening to pass on the Colorado Superintendent of the Year travelling trophy to Englewood’s Brian Ewert.  Mr. Ewert has been honored this year by CASE for his tremendous advocacy for public education and for guiding the Englewood School District from an Accredited with Priority Improvement rating to Accredited with Improvement.


Though we had no school on Friday I travelled to Pagosa Springs to attend the quarterly CDE Rural Education Council meeting. 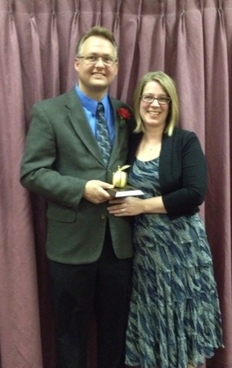 This week I have the honor of attending the annual AASA State Superintendents of the Year gathering in Washington D.C. representing Colorado as its 2014 superintendent of the year. The American Association of School Administrators puts on this event each year and covers the travel expenses for all participants.  My wife Becky will be joining me as we fly to D.C. on Monday, with plans to spend a lot of time with Center School’s Einstein Fellow Daniel Newmyer, his wife Kate, and their children Andrew and Chloe.  Of course Daniel is working for NASA this year in Washington D.C., and I look forward to seeing what he is experiencing and reminding him how much we look forward to having him back in Center next year.

On Tuesday we all plan to do some sight seeing in the morning, especially hoping to see the World War II memorial for the first time, on Veteran's Day no less, in honor of my recently deceased father who served from 1941 to 1945 in the Navy and in honor of Becky's father who served in the Army during the same time span.  That evening we get to attend the 2014 Superintendent of the Year Gala, a black tie affair at Washington’s Mayflower Hotel.  My agenda on Wednesday includes participating in a student data privacy panel discussion, a school discipline best practices session, a Capitol Hill tour, and then a meeting at the White House with President Obama’s Domestic Policy Council.  On Thursday we’ll be back on Capitol Hill to attend a federal school finance meeting and to participate in a media event.  Becky and I will then fly back to Colorado on Thursday and I’ll be back in the district on Friday morning.

Though I will be in the D.C. area for the better part of the coming week, on Tuesday CHS 9th graders will be taking the ACT Aspire test and the regular December board of education meeting will take place beginning at 7 PM in the Center Schools Auxiliary Gymnasium.  In the last 19 years I have never missed a board of education meeting, having not been physically present for only three meetings, instead calling in by phone each of those times.  I offered to phone in once again during this absence but board president Michael Lobato has given me permission to just enjoy the Gala, so I will do as he has directed. On Wednesday in Center our CHS 10th graders will take the ACT Aspire test, our CHS seniors will be participating in college scholarship day, and the district will also be conducting a Safe Routes to School grant planning meeting.  On Thursday Haskin Elementary students will be treated to a live performance by an African dance troupe, and on Friday I’ll get the pleasure of reading one of my favorite children’s books aloud to our Haskin kindergarten, 1st, and 2nd grade students (thanks to the coordination of Haskin Elementary School teacher Jennie Richards in honor of national Reading Week).   My selection?  Wet Dog by written by Elise Broach, and illustrated by David Catrow.  Shaky-shake, shaky-shake, shake!

Thanks for listening once again and have a great week!